This is the second part in a multi part post I'm doing, covering the basics of the reverb plugins that Logic Pro has to offer.

In the first part, we went over a reminder of the core concepts of what reverb is. We described the sonic phenomenon, and some of the concepts behind its application to music production.

We also covered ChromaVerb, which is Logic's really cool room emulation reverb with a great UI and some really neat features.

If you missed that first part, it's probably worth going back and checking it out.

But if you're confident on the core concepts behind reverb, let's move on.

In this guide, we are going to cover EnVerb and SilverVerb.

In the final part of this guide series, we will cover Space Designer.

So, read on for two of Logic's unique approaches to reverb.

EnVerb is a really cool plugin to have at your disposal.

The unique feature of EnVerb is that it allows you to adjsut the envelope of the diffuse reverb tail. T

his means you'll be using ADSR controls to shape the sound of your reverb, which can create some really interesting results. 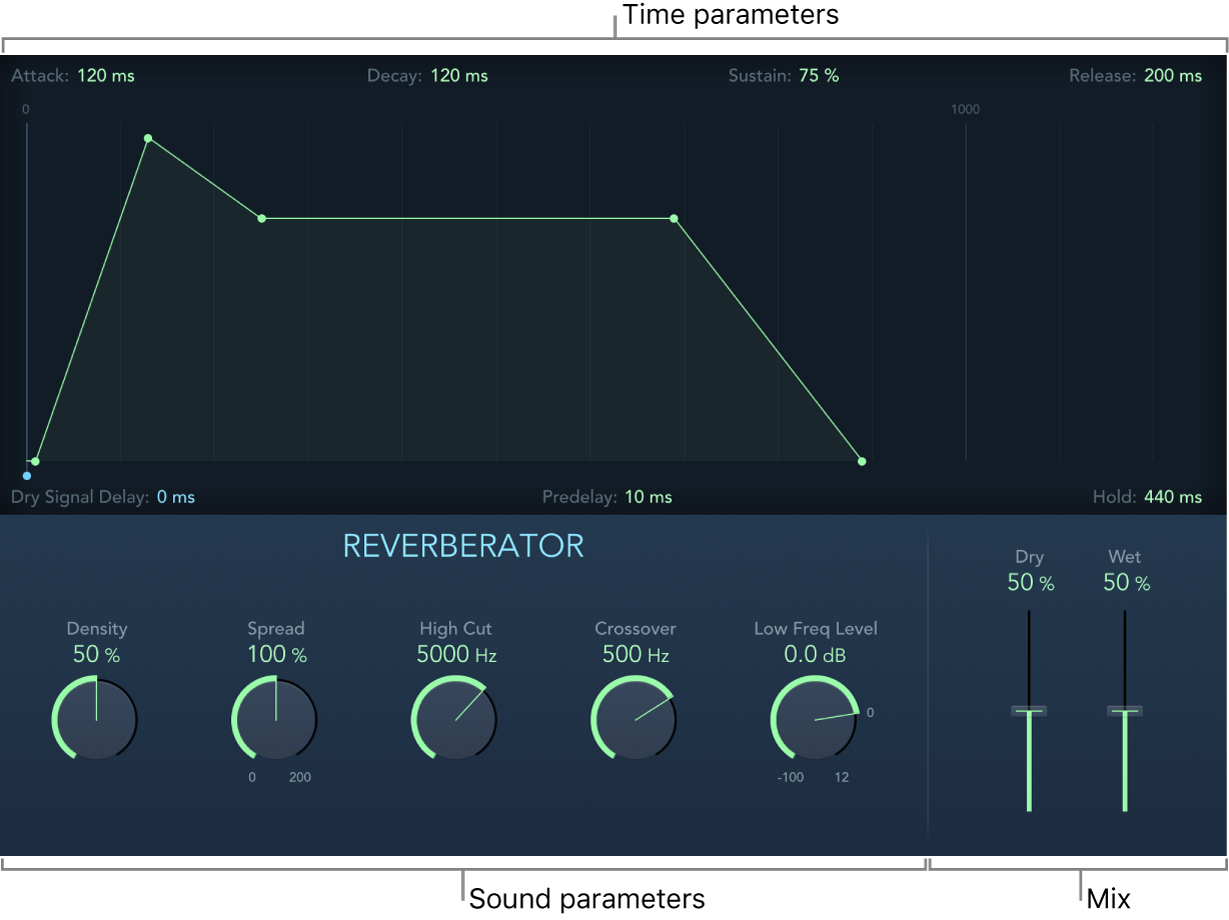 The first are the time parameters. So these run along the top of the unit, and you can see a visualisation (that we should all be familiar with) in the graphic display.

So, using the Attack, Decay, Sustain and Release controls, you can adjust the characteristic of the sound's envelope, sometimes to dramatic effect.

There are also three other controls in this section.

The bottom section of EnVerb is where some more traditional reverb controls live. You have the sound parameters and the Mix parameters.

As we said earlier, this is a relatively simple plugin, from a design standpoint. There's no flashy UI like in ChromaVerb, no plethora of different room options of tonnes of precise controls.

But what makes EnVerb unique is the envelope shaping possibility.

I wonder if that's where it got its name????

Being able to adjust the ADSR values of your reverb tail in such a precise way gives some really interesting sonic possibilities.

This is one where you will get the best out of it by experimenting. Throw it on various sound sources and play around with the controls to see what happens!

Now let's move on to SilverVerb.

So, since EnVerb got its name from the envelope shaping present in the plugin, I was disappointe at the lack of silver in SilverVerb.

But that's not important.

SilverVerb is arguably even more simple than EnVerb, at least from a visual point of view. But there's more than meets the eye.

Provided in SilverVerb is a low frequency oscillator (LFO) which you can use to modulate the reverberated signal.

There's also a high and low cut filter, allowing you to filter out unwanted frequencies from the signal.

This is useful for two reasons:

So it's useful to be able to filter out any unwanted frequencies in your reverb signal.

As you can see in the image above, we have the standard controls you'd expect to find in a reverb, which shouldn't need explanation by now.

I'm going to assume you're familiar with everything in the Room section above, though I will point out one control.

Reflectivity defines how 'reflective' the imaginary walls, celing and floor of the virtual space are.

Now, it's the Modulation section that makes SilverVerb fun.

Applying an LFO to your reverb can create some unique sounds.

This is where you can get creative with this effect.

Modulating your reverb - whether in subtle or extreme ways - is a great way to get some interesting sounds out of it, and this plugin would sound great on an electric guitar or some keys.

They're unique and they fill a bit of a niche, but again, it's really cool that these are shipped with Logic Pro without any extra cost.

You'd expect that the more stock plugins that come with a DAW,  the lower the overall quality is. But this is proving to be anything but true with Logic.

So far in this series we've covered ChromaVerb, EnVerb and SilverVerb, so stick around for the next part of this series where we will cover Space Designer, which is Logic's convolution reverb plugin.