Tradition in the music production industry has dictated that most DAWs follow the linear approach to displaying how music is recorded and created.

If you're unsure what that means, just consider how most DAWs follow a similar design.

You tracks are on one side of the screen, listed from top to bottom, and then your audio is organised and recorded into a horizontal environment which follows a timeline. This has been a standard way that Digital Audio Workstations have set out their programs. It references the 'tape recorder' era where you recorded your music onto a physical piece of tape. It kept things familiar for those producers who were making the jump from analogue to digital recording, or indeed, who used both.

But not every DAW has implemented this as its sole way of creating music. Many have tried the non-linear approach to making music, with early examples being Emagic's Notator and Creator programs. But the most successful and well known is probably Ableton Live. With its decidedly non-linear arrangement and the ways that allows you to experiment with music making, it was only a matter of time until Logic Pro devised something similar.

That something is Live Loops.

In this guide we are going to explore:

...and more! So grab a coffee, and let's look into Logic Pro Live Loops.

I've been using Ableton Live for many years, and it has always had a leg up on producing electronic music, because of its intuitive Session View. Completely separate to the Arrange View, this essentially turns Ableton into a loop machine. You can drag audio loops in as clips, which are arranged horizontally in scenes.

You can see in the image below, a small cut out of Ableton's Session View. Each track is arranged vertically, and the different coloured rectangles you can see are called clips. Running horizontally are scenes. You can see the play and stop buttons highlighted. You can either trigger an entire scene at once (which plays everything in that horizontal line together) or you can play individual clips from any scene together. 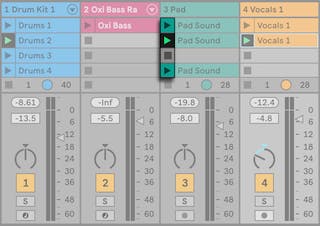 If you're familiar with Ableton Live and its Session View, then great. You know what we're talking about, but if not, hopefully this has given you a small insight into how it works. The purpose here is just to demonstrate how a non-linear production style works.

Note: This isn't Ableton's only way to make music. It also has the 'Arrange View' which operates much like other linear DAWs!

Technically speaking, Ableton is the company that manufactures the DAW, while Live is the name for the DAW itself. So I like to think that Logic's Live Loops is a little nod to Ableton Live, as it is so similar.

It's arguably one of Logic Pro's most exciting features they've released in the last couple of years. It brings a whole new way of working into Logic, and it's honestly a breath of fresh air.

So what is Live Loops? 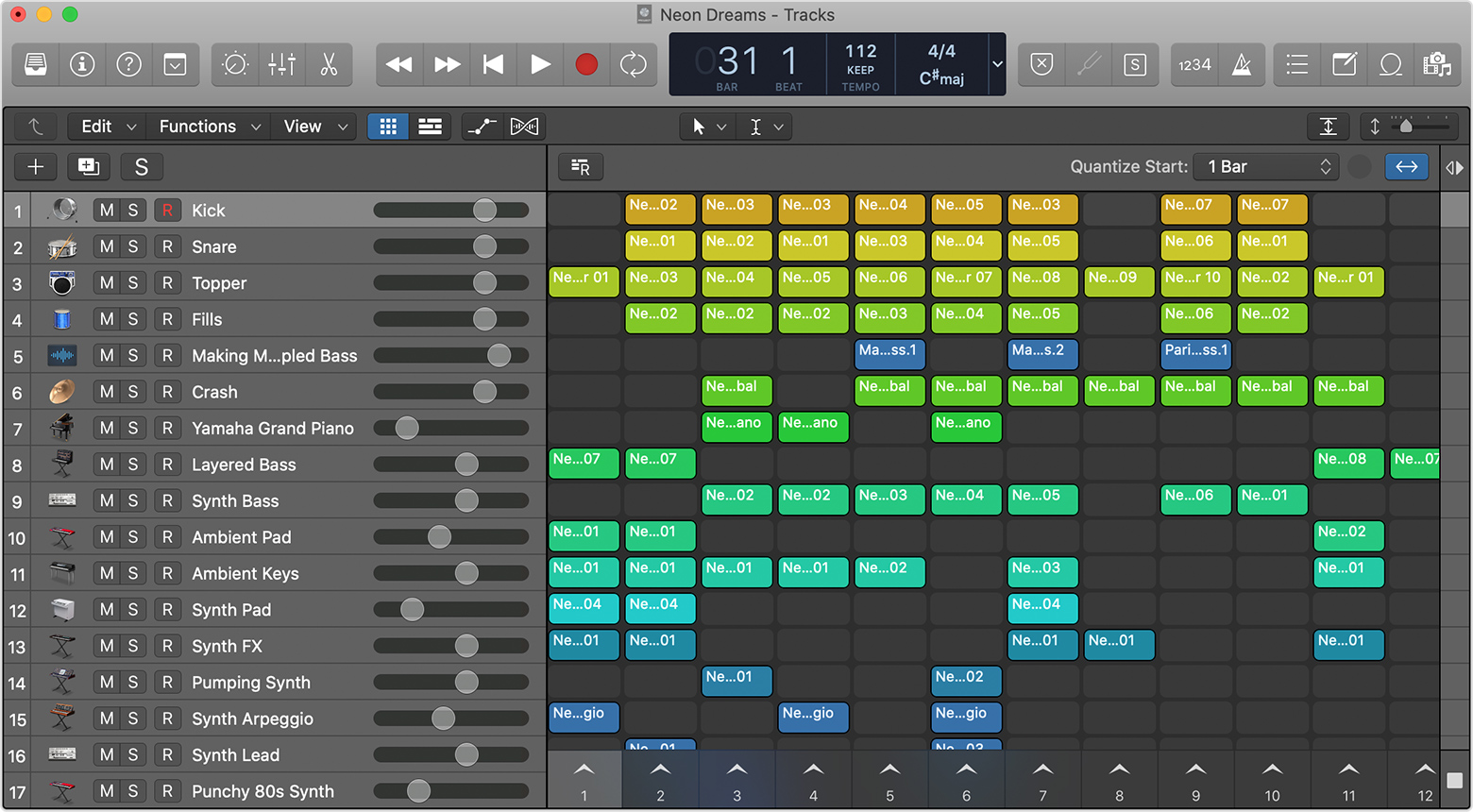 Live Loops creates a new environment in which to play with musical ideas. A grid layout is present in place of the usual Tracks timeline, and musical ideas are organised into cells. Each cell contains a musical phrase or idea, and they can be played in tandem.

Similar to Ableton Live's Session View, they are organised into vertical columns called scenes. You can see these in the image above running along the bottom, labelled with numbers.

A cell can be created with audio, MIDI, Step Sequencer patterns or Drummer Regions, so you have the same creative tools as when using the Tracks area. You can even record audio directly into a cell.

Needless to say, this opens up a plethora of new opportunities.

Many people who are used to Logic Pro's way of doing things may be initially hesitant to open up this new way of working. When you launch Logic, there are buttons to either show or hide both the Tracks and Live Loops view respectively.

Chances are, you'll be switching between Tracks and Live Loops view quite a bit once you get the hang of them, so it's a good idea to assign these buttons to key commands. It will help speed up your workflow!

So what can you actually do with it?

The first thing to note is that if you have any experience with using Ableton Live, you'll understand how that type of song creation can work. Instead of having to draw or record in your ideas onto the timeline, and then play them all together, you can now create one scene for each idea.

Live Loops allows you to play any two cells (regardless of what scene they are in) together. Simply hover over the cell and a play button will appear. It will then come in on the next beat, and loop for an amount of time that you set. You can even cue up cells to play after the current one has finished.

This is a great way to audition several different parts of a track together. If you have a few cells you like, throw them together onto a scene. Then you could have the scene looping while you try out other cells over the top of the arrangement.

It's a quick and intuitive way to make music. And even though the explanation may sound complicated, it couldn't be simpler. The music flows from your hands, allowing on-the-fly arrangements to be made in real time.

So what happens if you make an arrangement that you like?

There are a few options. You can simply drag cells into the Tracks window onto your timeline, and vice versa. Moving ideas between the traditional view of Logic Pro and this new Loops mode is easy and simple. You can also record directly onto your timeline from the Loops view. So if you have an arrangement  that you're absolutely vibing with, just hit your project record button and make some musical magic!

Not only is this intuitive, but more than anything, it's fun. And that is a really important thing that can often be overlooked. Making music regularly can sometimes become a chore, especially if you're working to release music on labels. A new feature that puts the fun back into it is not something to be scoffed at!

Putting the 'live' in Live Loops

Now there's a clue in the name of Live Loops for this next feature. It's the same with Ableton Live. A key part of this non-linear way of making music is not only that it gives you a whole fresh take on composing your music, but the potential for live performance is immense.

Ableton Live's Session View is intentionally designed to allow you to perform your music live as well as create it, all within the same software. And Logic Pro's Live Loops gives you that same potential.

It's fully compatible with Logic remote software, and even with a hardware controller that delivers MIDI data. If you've seen Ableton Push, and how that interacts with Ableton's Session View, you know what I'm talking about. Performing electronic music live (particularly in Logic Pro) has often been cursed by the 'producer behind a laptop' problem. Sure, you know that you're triggering a whole load of interesting and exciting musical ideas, but all the audience can see is someone pressing buttons on a laptop.

Simply assign cells and scenes to different pads using the Learn assignments window which is launched by pressing Command + L. You can then select a cell, and press the pad on your controller that you want to trigger it.

Live Loops' potential for integration with hardware controllers means you can engage more with the performance side of things, which is going to liven up your live show!

Now, I'm aware that my focus has been on electronic music production. It's what I make myself, and it's traditionally what non-linear production environments lend themselves to best. But as with all things music production, rules and best-[ractices only exist as guides.

Don't be put off if you're not an electronic music producer. This doesn't mean that you won't find anything of value in Live Loops.

Logic Pro included a bunch of 'starter grid' templates with the update introducing Live Loops, and these are a really useful feature which allow you to see what the new function is capable of. They can be purely educational, or you can use them for jump-off points for your own musical ideas.

The point is, don't be put off by Live Loops if you initially don't think it will serve your way of making music. The best results can often come from experimentation, so just open up a new project with Live Loops and see what you can do with it!

As always,  thanks for checking in with us here at  Logicxx.com. While you're here, make sure to check out some of our great deals on Logic Templates, which are another great resources for learning the tricks of the trade. Our dedicated team of producers craft detailed and professional level reconstructions of chart topping tunes, and you can download these and really get inside the project, seeing exactly how the pros do it!