If you're an electronic music producer, chances are, you use drums. Unless of course you're producing some of that new avantgarde music that tries to make a dance beat without actually using any drum sounds...

But I doubt it!

There are a tonne of options out there when it comes to creating drums, and Logic Pro packs a powerful punch in this area. So, in this guide here's what we're going to cover:

So, let's jump right in.

Drums form a really important part of your music, and while this may sound obvious, it can't be overstated. It's really easy to throw in a drum loop and call it a day, but it's in the nuances of a drum performance or drum pattern that the power in a track really comes through.

I used to really lack confidence in my drum programming abilities, and it was honestly because I just hadn't had enough practice. Hadn't spent the time really sitting down and learning the intricacies. Since doing that I've had some pretty drum heavy tunes released on labels, so that speaks for itself!

But with so much to learn and focus on with music production, sometimes a company comes in and introduces a new plugin or synth that really scratches an itch.

This is where Logic Pro's Drummer comes in.

If you're not familiar with Drummer, it's essentially a virtual drummer living inside your DAW, playing along to your track. The parts are represented as little yellow Drummer regions, rather than MIDI.

A Drummer track is instantly created with an 8 bar region, and a default patch is loaded.

It may not seem it from looking at things, but Drummer is packing a lot of power.

The first thing you'll want to do is select a genre and a Drummer. As you can see in the image below, there are several genres along the left hand column, and then the right hand column contains the different virtual drummers within that genre. Each of these drummers has a different style of playing.

This is the basis from which your drum pattern will be built. Drummer is amazing because it instantly gives you lifelike drum performances in a range of styles and genres, and it's customisable too.
Each virtual drummer includes a variety of presets which appear on the left side of the Drummer Editor. You can use these to cycle through different variations but stay with the same drummer. 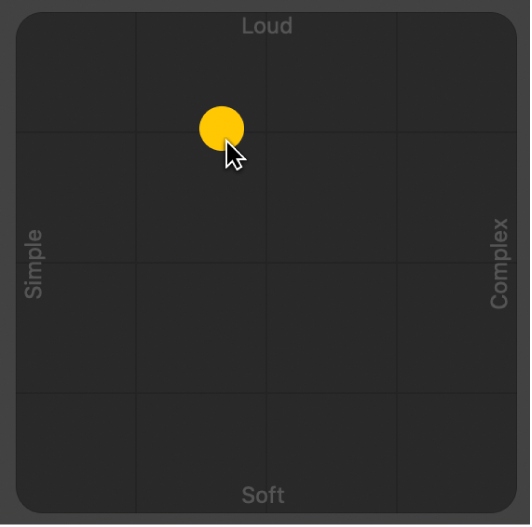 Now, where Drummer really starts showing its versatility is in the ability to adjust how loud and complex a pattern is. As you can see in the image to the right, there's an X/Y matrix which controls these parameters. There's a yellow puck which you can move around to adjust on the axes of Simple - Complex and Soft - Loud.
Not only can you adjust these parameters, but there are also controls for the variation of each piece of the kit within the pattern that's playing. You can edit the Percussion instruments (Tambourine, Shaker, Handclap) or the Cymbals, Toms and HiHats. You can also adjust the Kick and Snare variations. 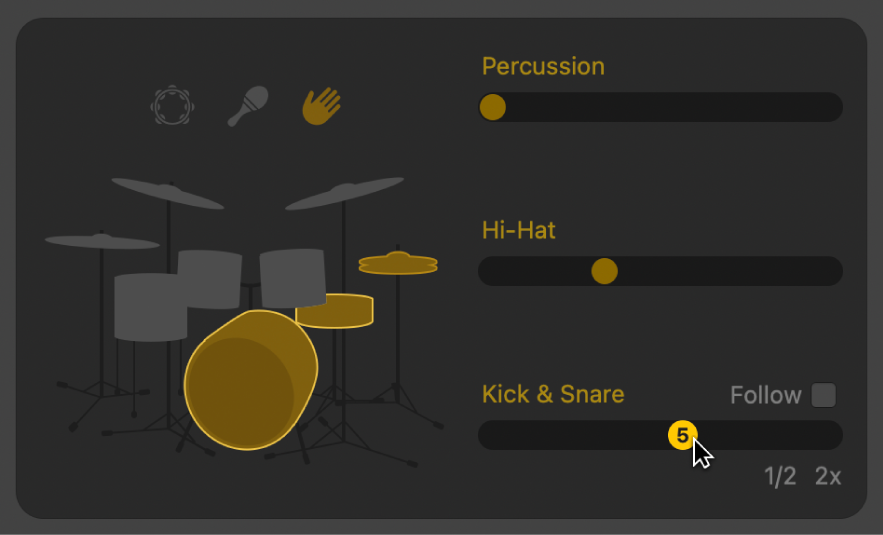 This is a lot to take in when you're reading it in an article, so the best thing to do here is take a few minutes and open up an instance of Drummer and have a play around. There are performance controls, allowing you to adjust the swing or the amount of fills within the performance. It really is something you have to experience to appreciate the simplicity of implementing such a great plugin.
It beats using loops (no pun intended), and gives that much needed humanisation to your music. There's nothing like having a real human being playing on your songs, and Logic Pro's Drummer is absolutely the next best thing.
Now, there are a few other things I want to discuss, so once you've had a play around with Drummer, come back and we will move on!

So, you've got your Drummer track loaded up, got a nice rhythm or beat playing, but you're not quite sold on the retro rock drum kit that Logan is using.

With Drummer, you can adjust the musical part of your drums, so the actual patterns and performances that are being played. With Drum Kit Designer, you're editing the actual drum kit! So, above you can see an image of the Drum Kit Designer's interface. It's split into three main sections.

So let's look into these in a bit more detail.

The Edit Panel is where you can adjust all sorts of parameters for each individual piece of the drum kit. Click on a piece of the kit from the (very lovely) picture in the middle, and then the parameters will apply to that kit piece. So, you'll notice on some of the options it says 'Producer kits only'.  These are extra downloadable kits you can use in your productions.
In all drum kits, you can  preview the drums, edit the pitch, sustain, and volume of each drum kit piece, and exchange the kick and snare drums. When working with Producer kits, you can additionally exchange toms, cymbals, and hi-hat. Producer kits let you turn different microphones, such as overheads or room mics, on or off.
A point I want to draw your attention to, because of how awesome it is; did you notice options for 'Overhead' and 'Room' up above? If you've ever recorded a full drum kit in a studio, you'll recognise these.
You're able to adjust the tone and sound of your drum kit using Overhead Mics and Room mics, which adds such a level of realism to the sound, it's honestly a fantastic feature!

It is worth noting that Producer Kits and some drums are only available after downloading some additional content! So, you can see the Exchange Panel in the image to the left. If you want to swap out a piece of your kit, click on it and the panel opens on the right if exchange pieces are available for that kit piece.
You can click the i button on a selected piece to view its description, and once you're decided on a piece, select it and that sound is now loaded onto your drum kit, replaced the old one.
So, as you can see, when you consider this with Drummer, there is a whole load of options for you when it comes to adding realistic and lifelike sounding drums to your performances. It's a great option if you're a singer/songwriter and you don't have access to a studio. You no longer have to wonder what your songs would sound like with a drummer, just load up an instance of Drummer, and then use the Drum Kit Designer to tweak the kit so it sounds perfect for you!
But what if you're an electronic music producer? Did you think we'd forgotten you?
Think again! 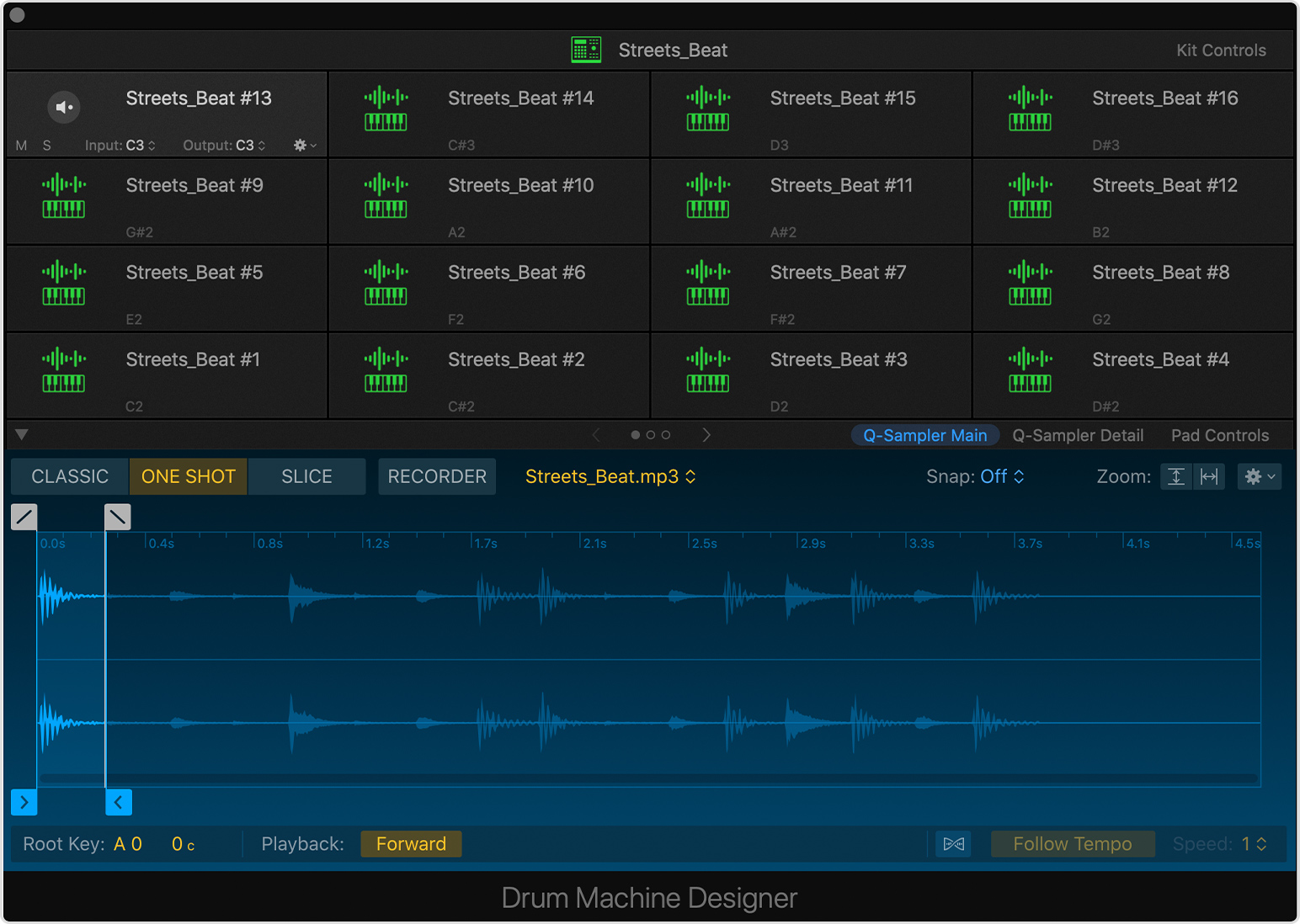 It isn't just humanised drum performances that you can tease out of Logic Pro. We've covered Drummer and Drum Kit Designer, but using the similar in name but different in application Drum Machine Designer, you can create your own kits and beats using all sorts of sounds.

So let's get the confusing part out of the way;

Drum Machine Designer is not a plug-in, although it can be inserted into instrument channel strips. It is a track-based meta-instrument using a track stack, which combines a main track and a number of subtracks. Each track has a corresponding channel strip. For information on adding a Drum Machine Designer track to a project, see the Step Sequencer chapter of the Logic Pro User Guide.

This is taken from the Logic Pro user guide documents, and it gives a bit of an overview of what Drum Machine Designer is.