If you’ve been reading our recent articles on Logic Pro, you’ll know it’s packed full of features, some of which are long overdue, which bring it right into 2021 in terms of functionality and usability, especially when compared to some of the other options for DAWs out there. However there’s one question that keeps cropping up on forums and the like, and that is will Logic Pro be available for the iPad?


In this article we will discuss;

So let's explore this topic in detail.

Could Logic Pro work on an iPad?

Rumours abound that Apple’s announcement of the latest model of the M1 iPad Pro will see a simultaneous announcement of support for its Pro apps. Many tech-heads out there speculate that support for Final Cut Pro and Logic Pro will come to the iPad Pro, respected tech analyst Jon Prosser claimed ‘It’s happening within the next year or so,’ as far back as May 2020, but there’s been no confirmation from Apple as yet.


When considering Logic on an iPad, there are many options to consider. Firstly, Logic’s stripped down sibling Garageband is available for iOS, so what would Logic Pro on iPad bring that isn’t there already? Are there specific features within Logic that could work on an iPad that aren’t available in Garageband? Many people on the various forums speculate we might see a stripped down Logic iOS version, rather than the full capabilities of Logic Pro on iOS devices. Bear in mind that Logic is a $200 software with almost 100GB of files, so would this be viable for use on an iPad? 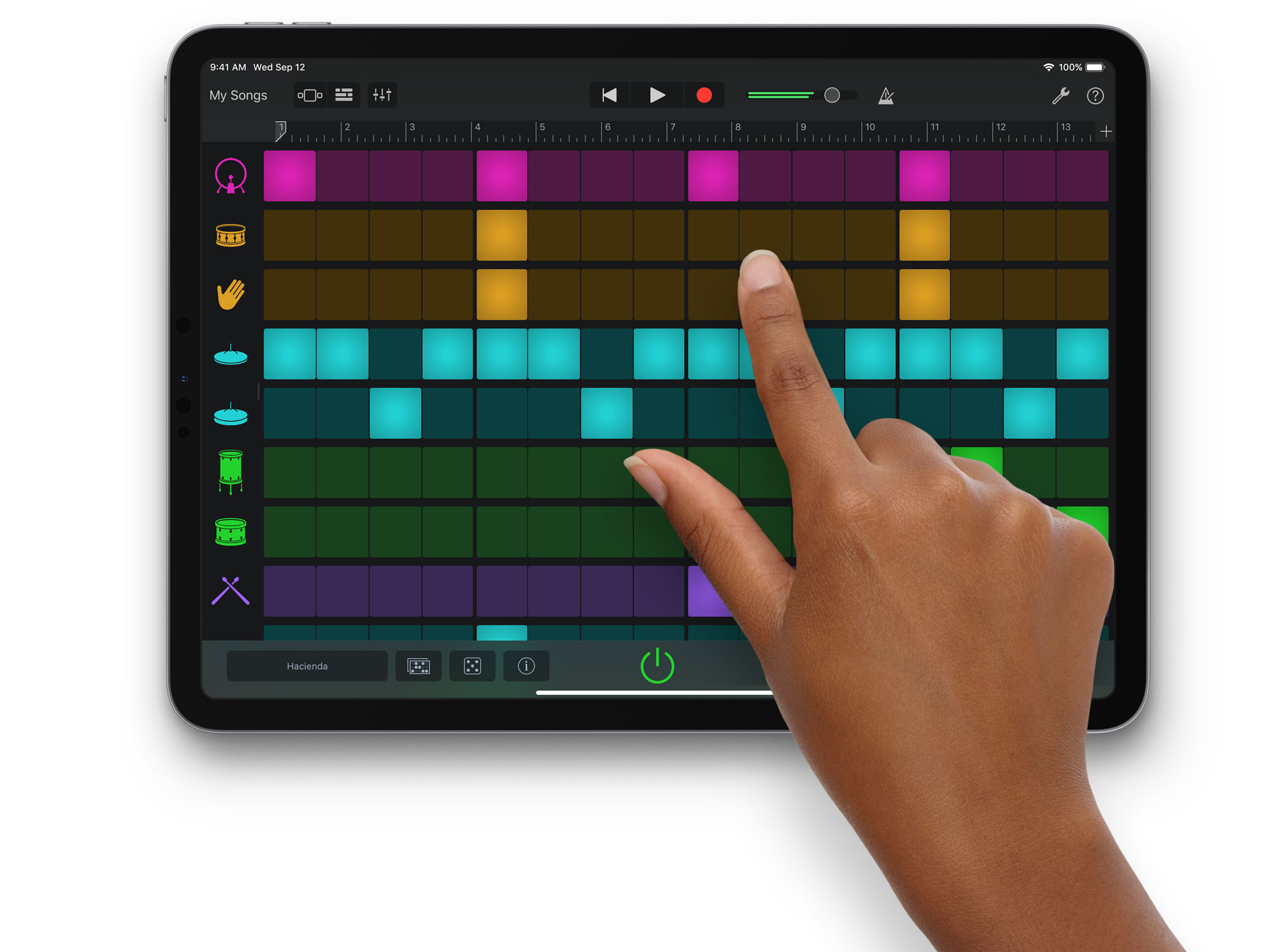 Logic has always benefited from its free and fun sibling software Garageband. Offering users a fun musical playground with a surprisingly robust set of features, giving a basic DAW experience for anyone who purchases a Mac.


The key with Garageband has always been simplicity. Where Logic Pro 9 especially had a complicated looking interface, Garageband offered a simple and aesthetically pleasing alternative. Accessibility is an important feature for DAWs, especially for new users, and Garageband has been the playground of many novices who have gone on to further develop their music production prowess.


Garageband for iOS is a great software, allowing all the features of Garageband in a wonderfully simple package. You can play, record and share your music on the go, and use the included Sound Library - a massive collection of free sounds, loops and samples created by world class producers.

A cursory glance at Garageband for iOS shows an interface with striking similarities to some of Logic Pro’s features. We see the Live Loops section, as well as the  touch controls for playing instruments. PLay keyboards, guitars and bass, synthesisers and more using intuitive touch controls which sound and respond just like the real life counterparts.


There is a beat sequencer, allowing anything from jamming live on a virtual drum kit to “drag-and-done Smart Drums”. It even includes Alchemy, a hugely powerful synthesiser.


Garageband for iOS is a ‘personal music creation studio’, and for a free software it really is wonderful and a far cry from the basic program it once was. The updates over the years have added tons of integrity as well as the functionality of some of Logic’s features. It’s a great option for producing on the go.


Another thing to look at in depth when asking the question of Logic being available for the iPad, is Logic Remote. What is it? What can it do? And is it lacking in any features that would warrant a full Logic port to iOS? 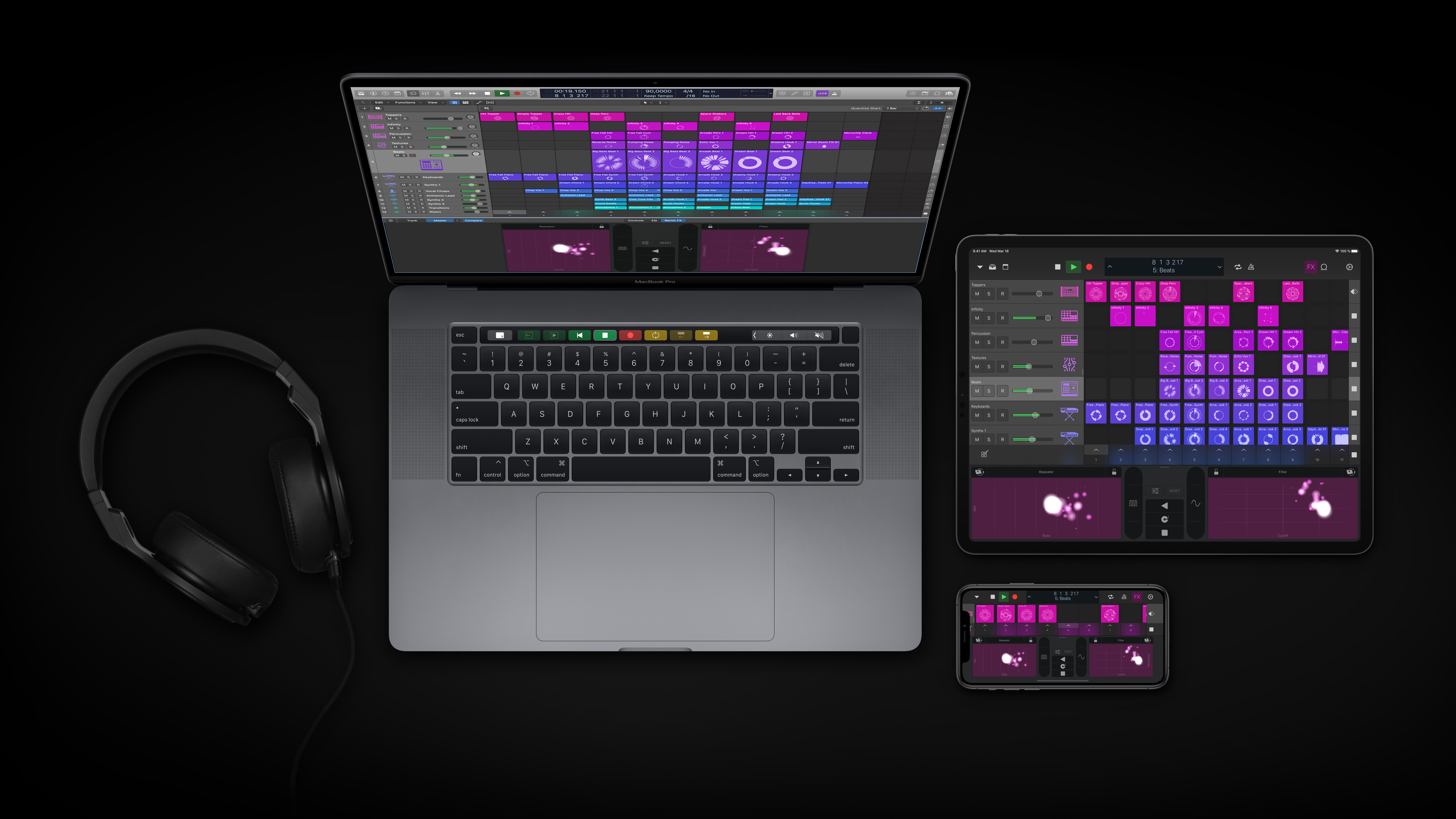 Instead of acting as a standalone version of the DAW to use on your iOS devices, Logic Remote is a companion to Logic Pro, allowing intuitive controls over your sessions from your iOS devices, so either your iPhone or iPad. The official overview from their Logic site says the following;

“Logic Remote lets you use your iPhone or iPad to control Logic Pro on your Mac. Use Multi-Touch gestures to play software instruments, mix tracks, and control features like Live Loops and Remix FX from anywhere in the room. Swipe and tap to trigger cells in Live Loops. And tilt your iPhone or iPad up and down and use its gyroscope to manipulate filters and repeaters in Remix FX.”


The best part about Logic Remote is that it’s free from the App Store, so no more costs to worry about. Working as a control surface, wireless transport, MIDI controllers and a dynamic ‘Smart Help’ Logic manual, this App is a fantastic addition to your studio set up.


Connecting via Wireless Network or Bluetooth, Logic Remote allows you to control the Playback, Recording, Looping and moving the timeline functions right from your iOS device. This is especially useful if you’re using one of the smaller screen Macbook models, as screenspace is like valuable real estate when you’re working on a  complex track with lots of plugins and instruments!


Logic Remote also allows you to adjust your mix when acting as a control surface, editing the levels, pan, sends, mute and solo functions and more. You can also record your changes live as automation right from Logic Remote.


There’s always a great function allowing control over plug-ins, even third party ones. Logic Remote shows a generic list view of all the plug-ins parameters, allowing you to change them while pacing around your room, if that’s your vibe!


There are many more features Logic Remote allows you to do, and I could get bogged down for hours talking about them, but I won’t. So let’s just say that if it’s something you’re interested in, check it out, because it’s free!


The concept of producing music on an iPad is an intriguing one, which brings to mind lots of questions about functionality and quality, at least in my mind. As technology improves, we are getting to a stage where actual viable softwares for music making become available on more devices, but are the tradeoffs worth it?


As it stands, Logic Pro as a full version doesn’t exist for iPad, and I wonder not whether it could, but if it should? It’s hard for me to see a viable set up for music making using an iPad as the main piece of kit, simply because of the limitations compared to using a computer.


As an example, Ableton’s Link feature allows wireless connection between Ableton Live and Link enabled apps on Ipad, iPhone or Android devices. There are so many apps out there - softsynths, sequencers and samplers - that work as an integrated part of the production environment through Ableton Link. However, a standalone version isn’t available, just as for Logic.


While I don’t want to sound elitist, I think the future of iPad based production is in the direction of Logic Remote or Ableton Link; integrating the iPad as a component of an existing production set up, rather than replacing a computer with a fully fledged DAW on the go.


While stripped down versions of DAWs like Logic or Ableton on an iPad could be great, especially for sketching ideas on the go to then transfer to the full version on your computer, I can’t see a scenario where I would be reaching for an iPad before a computer when wanting to work on some music.


All of the above is - of course - just my opinion. We may yet see a version of Logic Pro for the iPad; many tech analysts suspect so, and with Apple’s M1 iPad Pro announcement there are possibilities for their Pro Apps to be run on iPads.


What may be more likely, though, is seeing ‘lite’ versions made available. So perhaps we could see Logic iOS released, offering a version of the software that is tailored to iPad use?


On the other hand, we may yet see a full version, so it’s difficult to say with any certainty!


What would you like to see? Would a fully functional Logic Pro for iPad be welcome in your production set up? Does the already available Garageband and Logic Remote make a full version of Logic for iPad obsolete, or even unnecessary? Let us know in the comments!